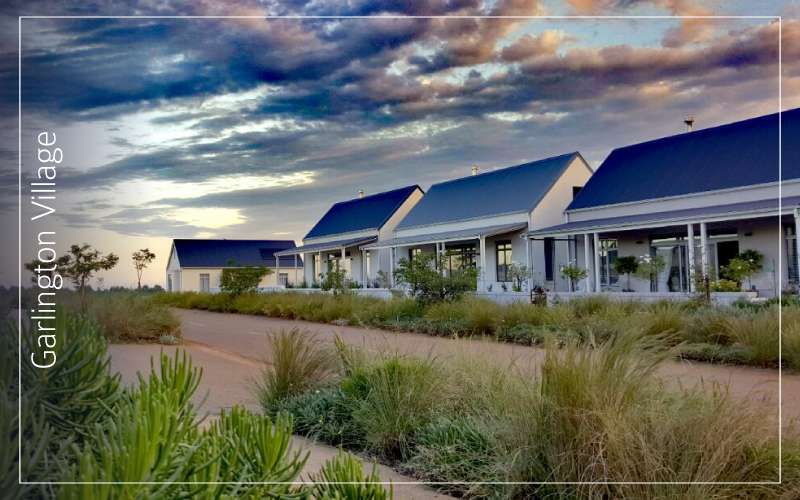 In a world preoccupied with categorising and stereotyping, it is so pleasant to come across exceptions to the rule.

I was recently invited to visit Garlington – a retirement village in Hilton. Having worked in retirement arenas for the last 25 years, I am accustomed to developers’ intent on placing seniors in boxes marked sell-by-date past. Seeing Garlington Village was both unexpected and pleasing – to come across a development which thinks ‘out of the box!’

I must concede that my initial reaction was… “Oh no! Garlington will be just another retirement village… I was familiar with countless retirement villages, many of whom had developed typical reputations as waiting-for-God departure lounges, so surely a Garlington experience would merely be more of the same?” (I, in fact, initially even resisted accepting the invitation). But how wrong was I!

My only previous encounter with the village occurred some years ago while visiting my daughter and her family, who were at that time living in Garlington. And, as I watched my grandsons livening up the roads on their bicycles and skateboards, I recall reflecting that this youthful sight introduced a new dimension to modern-day village life. I felt the same seeing my daughter, an avid photographer, creeping along on all fours, on the grass to photograph other village residents, such as the herds of Zebra and Nguni cattle.

These experiences drew a firm line in the sand between the old and the new – the difference between yesteryear’s villages, which were sometimes staid and boring, and several of the more modern estates, where not only did life continue, but if anything, it became even more exciting. And now having revisited Garlington, my encounter with the village, has left me both intrigued and impressed by the extent to which it differs from the stereotypical village.

So what makes it different? Why do I refer to it as a gem?

It is not merely just another retirement village! – In South Africa many people move into gated communities and then later, as they grow older and retire, frequently have to move again; this time to bona fide retirement facilities. Coming at a time when they are now older, many find this final, late-life move quite traumatic. However, Garlington’s provision of continuing security and care (if and when the need arises), differs considerably from the norm. Their village design and visionary approach, being more akin to a communal living village, as it encompasses accommodation and care for all age groups; and they have had the unique foresight to facilitate a continuum of enthusiastic lifestyles. (This could be genuinely described as a… from the cradle to the grave approach).

Accessibility – Situated in Hilton, outside of the hustle and bustle of modern-day suburbia, and barely a mile from the N3, the village provides easy access to bespoke Shopping Malls and other convenient destinations. Its position also means that the Coast, Berg, and even Gauteng are readily accessible. Gone are the days when retirement meant a gold watch; a farewell party and a rocking chair on the verandah – many of today’s retirees use retirement villages as a base from which to travel and explore the world – to undertake those adventures which careers, and family responsibilities, may have restricted. And Garlington is just such a base and haven from which to launch adventures.

The climate – yes, there are other sort-after localities to which retirees migrate. Areas such as the Western Cape and KZN North Coast come to mind, but this choice ultimately depends on whether you prefer temperatures which are at least 5 degrees hotter than Hilton, how fond you are of rust, and how much you like crowds. To my way of thinking, this is a no-brainer! For me, Garlington provides pleasures without pain.

Garlington is one of the very few villages which offer sectional tile; life-rights and rental opportunities – a very rare range of purchase models. And in terms of Assisted Living and Care Centre affordability, it always needs to be borne in mind that there are no free lunches! Care is subjected to stringent legislative requirements; and perhaps even more inflexible family expectations … all of which come at a price. By comparison, Garlington’s prices are affordably kinder than many of the luxury schemes.

Care Centre – The main focus of my visit was the newly constructed Care Centre and Assisted Living Facilities, and these did not disappoint! There is a growing architectural tendency towards minimalism, but what has made Garlington’s Care Facility design stand out from the crowd, is the architect’s ability to combine minimalism with homeliness. Not for them the cold, pristine walls of convenience – rather cleanliness and simplicity combined with relaxed surroundings – a combination which creates a veritable home-from-home. The design comprising three fireplaces and multiple recreational rooms for only ten residents is an indication of the importance placed upon privacy and freedom of choice.

No, Mr Resident, you will not be forced to sit in a lounge, strictly in line with nine other residents; nor will you be forced to watch TV programmes and soap operas, which you would never have dreamt of watching in your previous life! The purposeful avoidance of institutionalisation means that you will still be entitled to make choices concerning how you would wish to spend your time… This is still your life!

Staff team – And then last, but not least there is the committed staff team. When dealing with care – bricks and mortar do not cut it; the essential ingredient in the provision of care is to have a genuinely committed, friendly and professional staff team … and on the day of our visit the staff that we encountered undoubtedly ticked all these essential boxes.

I can genuinely say that having worked in the field of retirement and care matters, both in South Africa and internationally, for over 27 years, I have yet to encounter a village as impressive – Garlington is indeed a Gem.